Since the 1990s, Cooleemee has honored Independence Day with a lawn mower parade that begins at Cooleemee School. Anyone can participate by lining up a patriotically decorated lawn mower, float, car, bicycle or pet by 9:30 AM. The parade begins at 10am.

This year’s parade will have a musical flair thanks to the bluegrass stylings of MJ & Friends (Mona Jo Griffin) whose float will stop along the route for a little “pickin’ and grinnin’”. The group  will also play from the porch of the Zachary House following the parade. 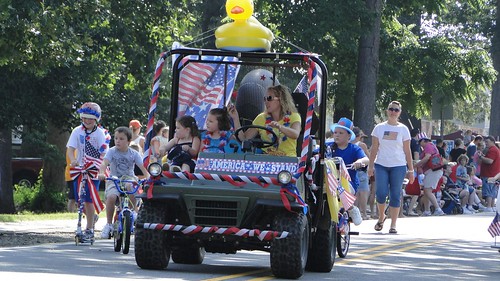 Judges will be in the crowd and there will be prizes to win at the parade’s end on the Zachary House grounds. Bring your lawn chair and view the parade along Marginal Street.

Following the parade,  guests will enjoy free watermelon and ice cream under the arbor. Kids will enjoy a large water slide and water games.  The youth from First Baptist Church of Cooleemee will be selling hot dogs and cold drinks at the Cook Shack. The July 4th activities are sponsored by the Town of Cooleemee.